Analysis into the root causes of, and various influences to, a problem will help in identifying the role that your organisation’s actions can play in improving the situation at hand, with support of a mix of communication efforts. A mix of relevant primary and secondary data, including research reports, government statistics, expert interviews and communication assessments, will provide useful information to better understanding the situation — not only the challenges, but also the opportunities.

The Social Ecological Model (SEM) is a useful framework during this early analysis phase. SEM helps to identify and understand the various levels of influence on a person’s knowledge, attitude and practices. This framework looks at the complex relationships between individual, interpersonal, community and societal factors. These relationships are always context specific. However, ideally, each level of influence will be addressed for optimal results in an individual’s behaviour change journey.

Each level of influence on the SEM framework will require the implementation of a different type of C4D approach. When addressing the attitudes, motivations, knowledge and behaviours of an individual at the core of the issue, behaviour change communication with its inter-personal and small group communication activities tend to be most impactful. Depending on the problem issue, sometimes these activities (e.g. migration or nutrition counselling) may need to be extended to cover select members from immediate social groups, such as family members or teachers. In many cases, however, these influential people and groups may sufficiently be engaged through community-level social mobilization activities that aim to educate and motivate larger groups of people or social networks (such as community members, peer groups or religious congregations) to take joint action in support of an issue (e.g. demanding for more equal access to, or quality of, social services).

Societal and organizational levels of influence that deal with the organization of social services, development of policies, laws and regulations, funding, etc., and actors influencing the larger public discussion (e.g. media representatives, academia and opinion leaders) are most effectively addressed with strategic and tailored advocacy measures.

The factors behind the exploitation of migrants and other vulnerable populations are often crosscutting, such as corruption and lack of and/or inconsistent application of protective policies and practices. Lack of accurate information is also central, because without the right information...:

...Aspirant and current migrants do not know: how to migrate safely; what their rights are; what to expect once they arrive at their destination; what is exploitative or that exploitation is criminal; what recourse is available to them should they end up in a situation of exploitation and more. For example, IOM X conducted interviews with aspirant migrants in Cambodia and they all indicated minimal planning for their departure. None had visited a local resource centre and most were planning to travel irregularly (without a passport, visa or work permit).

..Employers and those living in more affluent host communities lack information about: the benefits of migrant labour to their economies; what rights are afforded to migrant workers; how they should be treated; and how to practice responsible consumerism to ensure that the goods and services bought are not provided by exploited labourers. For example, in a recent IOM X study, employers of domestic workers in Indonesia and Thailand expressed attitudes similar to apathy; such as not caring about exploitation of domestic workers and their labour rights.4

…The broader public (general public) lack information about: their role in contributing to environmental and societal change when it comes to advocating for change on a local, national and regional level.

Negative attitudes can create environments ripe for deception and exploitation. In demand areas, negative attitudes like xenophobia and discrimination toward migrants and minority populations perpetuate unfair treatment including, in the extreme, outright exploitation and abuse of labourers, and more commonly, apathy amongst the general public in reporting suspected exploitation of others. In source areas, there are often positive attitudes towards migration and its potential benefits, and negative ones for returned trafficking victims. Stigma and discrimination towards returned trafficking victims make it hard for these individuals to re-integrate into society and because of this social exclusion they are often at risk of being re-trafficked.

Audience analysis identifies the various potential audiences at each level of societal influence whose knowledge, attitudes and behaviour(s) the activity(ies) is/are trying to change.

a. Identify the target audience:

There are many potential target audiences for each problem issue. For counter-trafficking  activities, these might include some or all of the ones mentioned below:

b. Determine the primary, secondary and tertiary audiences:

Levels of influence introduced in the SEM framework, and guided by available evidence, determine the primary, secondary and tertiary audiences for addressing the problem at hand. 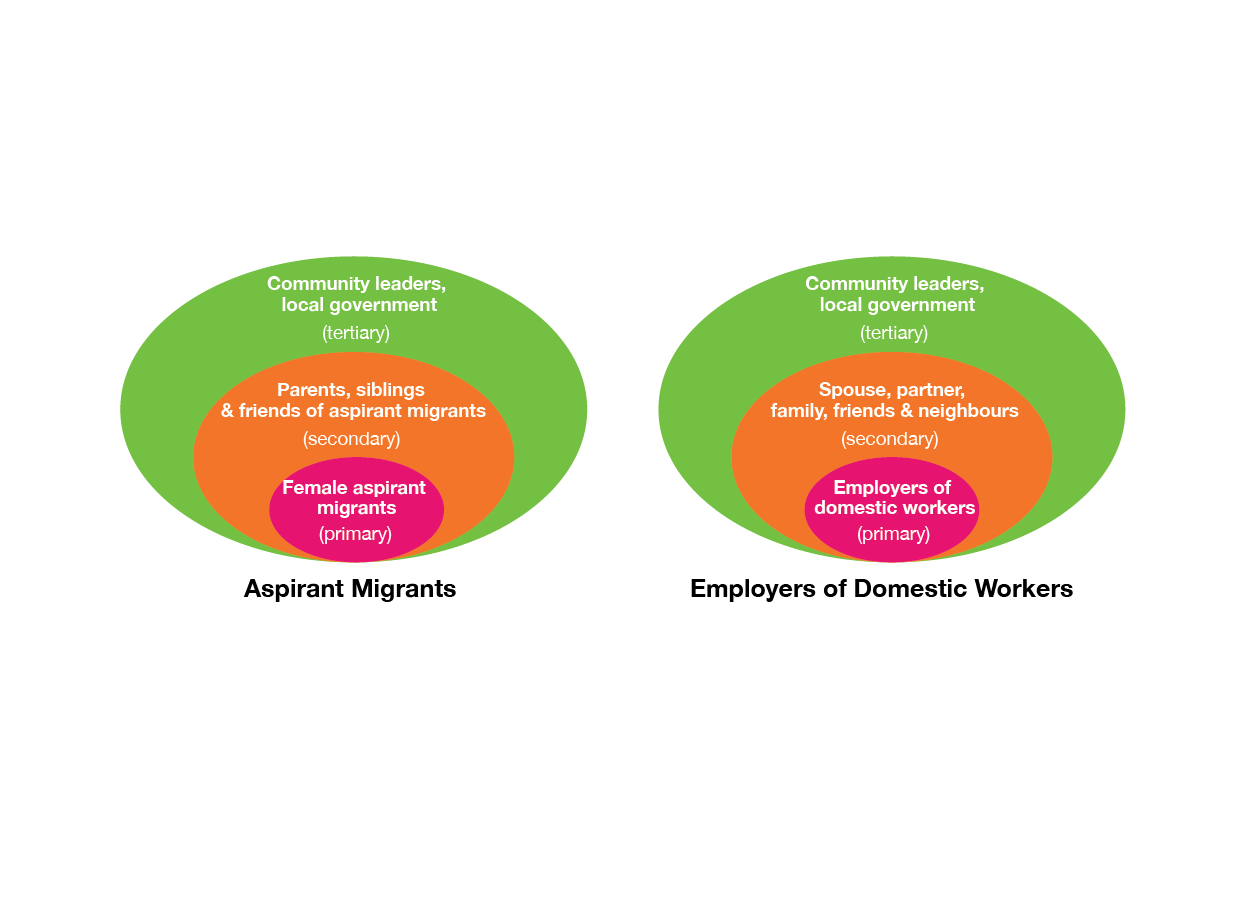 Specificity is important to be able to design effective activities later on. Messages for a primary audience are not likely to be drafted and disseminated the same way as messages for a tertiary audience. Sustained behaviour change is more likely to happen in a supportive environment, which consists of family and community, social and cultural norms, national policies, etc.5 A common weakness is targeting the primary audience without thinking about the secondary and tertiary audiences. This consideration becomes increasingly important when the primary audience may have less agency and/or free will to make decisions for themselves. A good example of this is considering the role of parents with regard to the decisions of their children. Likewise, the quality of care given through interpersonal communication by, say, psychosocial support counsellors, is a critical component in the successful recovery of the users of these services. 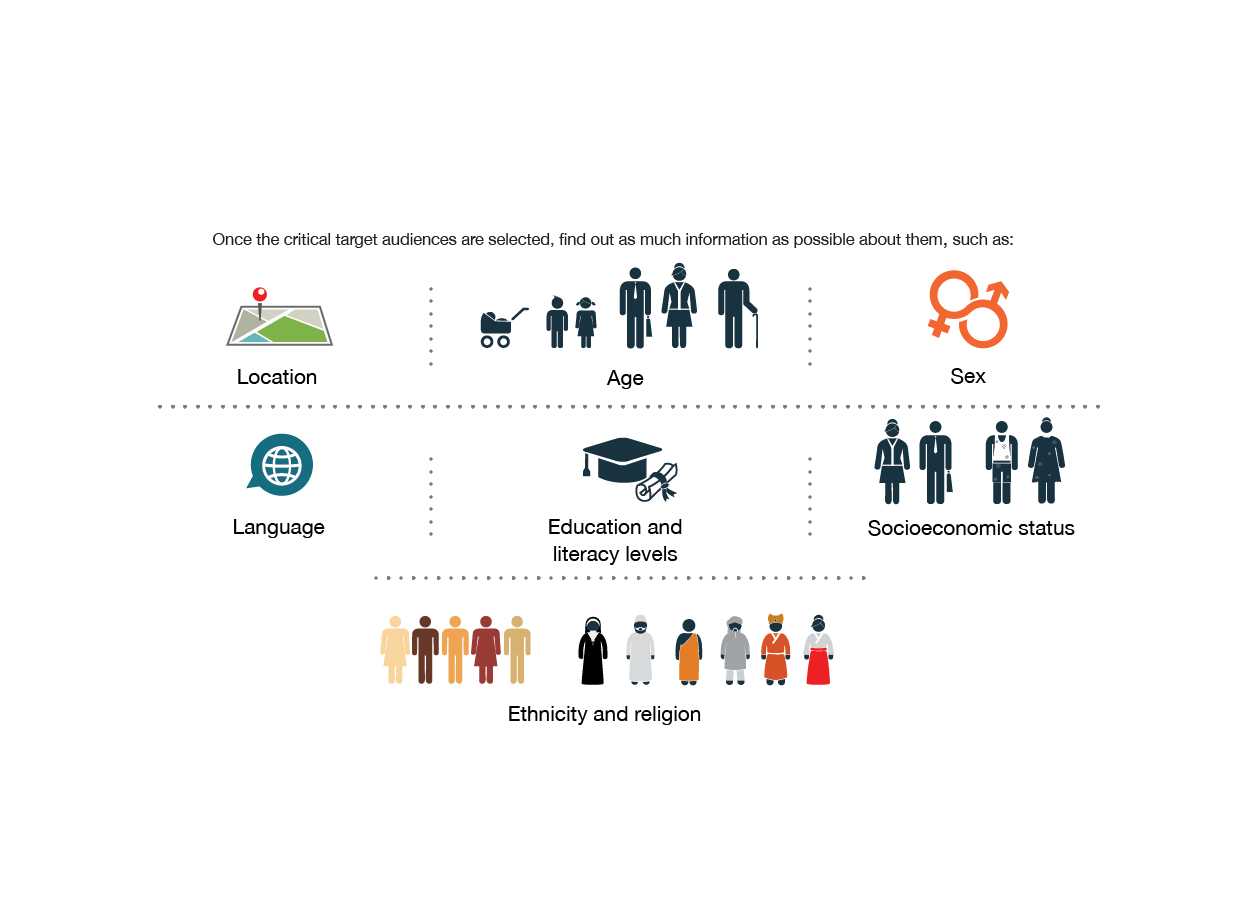 The more specific the information about your target audience, the easier it is to develop targeted messages and activities.

The next step is to assess what the primary, secondary and tertiary audiences know about the issue at hand. What are their attitudes towards the issue? What are their current or intended practices (behaviours)? This information is assessed against the optimal levels of knowledge, attitudes and desired behaviours.

e. Begin to fill out the C4D Strategic Planning Tool:

Knowing the different target audiences, their characteristics, their influencers, and their current knowledge, attitudes and practices will paint a clear picture of their motivations and understanding of the issue. With all this information, it is time to fill out the C4D Strategic Planning Tool. The C4D Strategic Planning Tool enables project teams to plan an evidence-based, relevant and contextual set of activities that will target the primary, secondary and tertiary audience in the most impactful ways.

In the table below, the first part of the C4D Strategic Planning Tool is filled in with research conducted by IOM X, which includes desk review research and surveys conducted by Rapid Asia on behalf of IOM X activities in 2015 in urban areas in Thailand:

Through consultations, focus groups discussions and interviews, and community meetings with representatives from the target audience, come up with a list of desired, concrete behavioural actions (e.g. memorizing a hotline number, providing a weekly day off to their employees, visiting a Migrant Resource Centre, systematically sharing key hygiene messages with each health centre client, reporting suspected exploitation, applying for a passport, sharing positive psychosocial support messages in community meetings, etc.) and consider the following questions:

b. Barriers and positive factors:

Once the desired behaviour has been identified for each audience group, it will be important to look into the factors that can make practicing this behaviour easier (positive or enabling factors) and/or harder (barriers). Gaining an understanding of and considering such factors will make it much easier to develop and execute successful interventions. To guide this assessment of potential barriers and positive factors against the recommended behaviour in a given context, think of PESTLE!

PESTLE stands for Political, Economic, Social, Technological, Legal and Environmental considerations.  Strong local leadership for social causes and particularly for counter-trafficking is a positive political factor in reducing incidences of human trafficking. A strong education system in that community and employment schemes for young people are positive economic and social factors. The presence of Migrant Resource Centres, counselling centres and helpline numbers can be technological positive factors. Existing counter-trafficking laws are legal positive factors. As for environmental factors (which can be positive or a barrier), they can include natural disasters or lack of natural resources that can cause people to migrate.

Far too often in message design, the focus is placed on the barriers to desired behaviour and less attention is paid to existing strengths. A focus on barriers, while very important, may also easily lead to message design that says "don’t do X or Y". Conveying positive messages and existing strengths of a community (such as services and resources) enables the target audience to attach personal value to the issue.

People are more likely to adopt behaviours if they know that there is already a movement within their community towards adopting that behaviour or if they perceive that it is the norm.

The last step of the analysis is to understand how the target audiences access information and what their preferences are for different media platforms. Some key questions are:

It is not only important to understand which media platform the target audience turns to for information and entertainment, but also what are the most trusted and accessible interpersonal sources of information. For example, do they turn to local NGOs, the village chief, their teacher or their friends at school for information? Having a clear understanding of interpersonal sources will be important especially if
community-based outreach activities are being planned.

Once different sources of information have been assessed, fill out the following table. Please see the example provided below, which is filled out with the findings of a KAP baseline study conducted in Cambodia in December 2013 by Rapid Asia and MTV EXIT.

After the analysis in the table above is done, it is time to bring it all together and start planning the communication strategy. 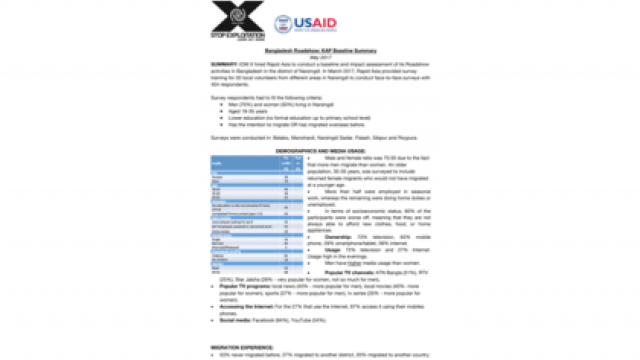 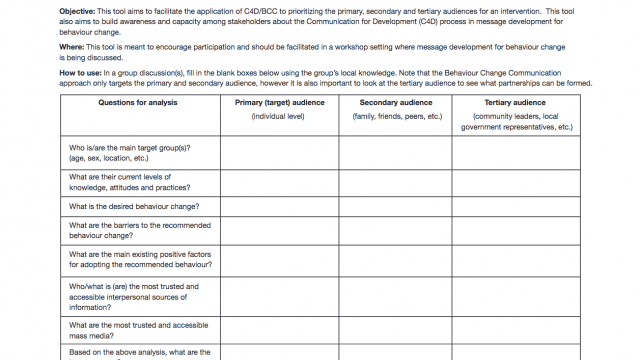 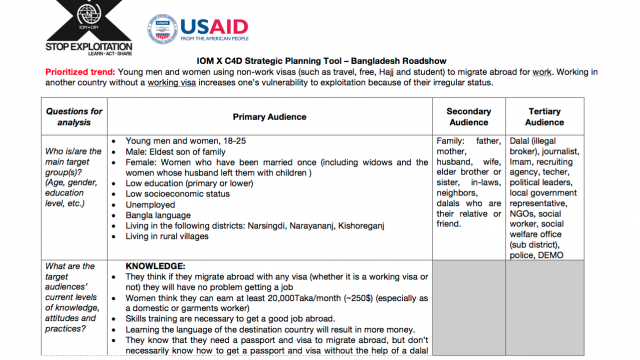 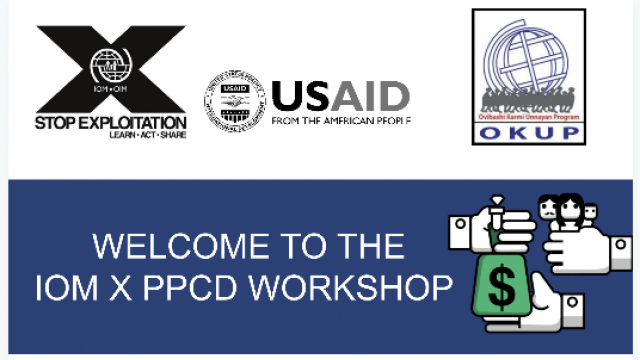 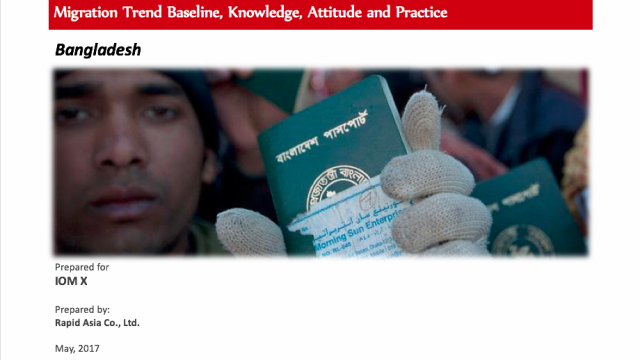 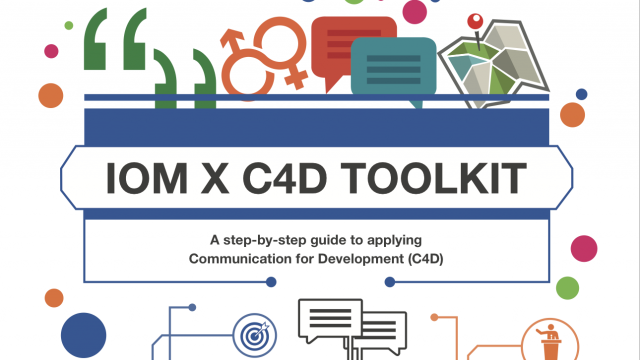